Earlier this week, Dr. Jonathan Dube of the University of Montreal led researchers to demonstrate an association between cortical thinning and a decrease in slow-wave sleep (SWS) spindle density and slow-wave* amplitude* [1] in a cohort of Canadian men. These findings strengthen the link between sleep robustness and cortical thickness in the brain. 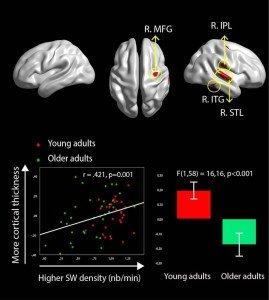 Further analysis revealed that thinning in cortical regions responsible for the orchestration of SWS, in addition to cognitive function, explained the age-related decline in slow-wave spindle density and amplitude.   This age related decline is best displayed in the following figures, which graphically represents how brain aging causes SWS density, amplitude and slope contraction (or vice-versa, how impaired sleep architecture might facilitate brain aging).

SWS is often referred to as deep sleep, and consists of stage three of non-rapid eye movement (NREM) sleep. Just like any other waveform, slow-waves have an amplitude and a frequency. Electroencephalographic (EEG) activity during SWS is highly synchronized. Large populations of cortical neurons slowly oscillate between depolarization (neuronal firing) and hyperpolarization (no signal is generated).

Interestingly, some neuroscientists have speculated that more information is contained in the time between subsequent depolarizations than the depolarization event itself.

The characteristic synchronized slow oscillation of SWS produces a wave with a high amplitude and low frequency (typically less than 4 Hz, or 4 cycle per second). Slow wave sleep is regarded as extremely important for memory consolidation, and SWS verifiably enhances the encoding of declarative memory.

The amplitude of slow-waves during SWS is sometimes referred to as “delta power.” Delta power is an indirect measure of sleep pressure which accumulates during the day and is dissipated during the night. Put differently, delta power is homeostatically regulated in a diurnal fashion, such that the propensity to enter SWS is greatest at night and least in the morning.  During adulthood,  alterations in sleep architecture (specifically, decreases in slow-wave amplitude, density and slope) are observed predominantly in frontal regions implicating impairment in the cortical circuits which underly slow-waves.

Infants spend a great deal of time in slow wave sleep (sometimes >12 hours a day) and therefore experience more delta wave activity. (Delta waves refer to oscillations that occur less than 4 times per second or 4 hertz). Early brain development is a period of greatly enhanced synaptic plasticity, which allows neonates to soak up information about their environment like a sponge. Some researchers have speculated that this neural state of heightened synaptic plasticity is intimately linked with the large fraction of time that infants spend in SWS.

Conversely, higher SW amplitude and density in adults is associated with greater grey matter (as revealed by voxel-based morphometry). In a similar vein, frontal SW density is strongly associated with verbal fluency in older adults. The authors therefore propose that age-related deterioration of slow-waves is driven by cortical thinning, which in turn is caused by decreased cognitive performance.

CDP-choline benefits the brain in numerous ways. It behaves like a prodrug for both choline (and ultimately acetylcholine) and…