If you want the payoff now, here are my recommendations: As always, do your own research and assume that no one knows what they're talking about (including me).

What Are the Best Nootropics?

Would you like to cut to the chase and identify the best nootropics? Such knowledge would save time and avoid fruitless experimentation.

If you're drawn to the idea of cognitive enhancement, you're not alone. On some level, everyone hopes to realize their latent potential and perform at their peak.

Artistotle maintained that humans can only reach their capabilities in communities. Humans are only compelled to compete with each other in communities and cultivate arete (excellence). How smoothly your brain is working helps determine whether you reach your intellectual potential.

Nootropics and supplements are just one aspect of a brain optimization strategy, but they're an important one.

One limitation of simply trialling nootropics without research is that cognitive enhancement and the self-perception of enhancement often do not align. Adderall might make you feel smarter, but how do you know it's not just increasing your confidence? 27.

The placebo effect is another confound. This study28 reported that the expectation to receive methylphenidate elevates arousal and mood but not cognitive performance:

This study examined whether placebo effects influence reports of subjective mood and cognitive performance among college students who endorsed several risk factors for prescription-stimulant misuse (i.e., low grade point average, fraternity/sorority involvement, binge drinking, cannabis use). Ninety-six subjects (60% male) completed cognitive tests and questionnaires assessing present mood state on two occasions. Forty-seven participants were randomized to an experimental condition and orally ingested what they believed to be MPH, though actually placebo, on one visit and received no medication on the other visit. The control group received no medication on either visit. During the administration visit, experimental participants reported feeling significantly more high and stimulated compared with the nonadministration visit and to the control subjects. However, cognitive enhancement differences were not generally seen between visits or groups. This research demonstrates that placebo effects for prescription stimulants do influence subjective mood and may be implicated in nonmedical stimulant use.

Given the above concerns, what works?

Not everyone responds the same way to a nootropic, drug, or supplement. Despite this intrasubject variability, we can make some generalizations about what works. Over the years, I've gleaned a sense of what leads to tangible cognitive gains.

When most people begin their nootropics journey, they tend to ignore the fundamentals.

They are drawn to the cutting edge stuff and are less interested in basic nutrition.

Before delving into nootropics, cover the following bases:

Slate Star Codex and Gwern conducted a survey on people's self-reported experience with nootropics. About 150 Redditors filled out their 2014 questionnaire.

The 2016 survey posted on Reddit attracted a whopping 850 participants. The participants ranked nootropics on a scale from 0 to 10, agreeing not to rate nootropics that they had not personally tested.

Admittedly, a a self-reported survey isn't particularly useful for evaluating the efficacy of nootropics. But it does reveal trends in consumer sentiment. Note that the highest rated nootropics in the 2016 study (Adderall, Phenibut, Modafinil, Tianeptine, LSD micro, Semax, and Caffeine) are all obviously psychoactive.

What's The Definition of A Nootropic?

Socrates (taken at face value in Euthyphro) liked to try to pin down a definition of a term before embarking on a discussion about it.

So how do we define a nootropic?

The criteria a substance must satisfy in order to be a nootropic are:

There are always trade-offs with nootropics.

Amphetamine has the potential for harm but enhances attention in ADHD and some non-ADHD subjects.

The trade-off here is that enhanced attention may interfere with cognitive flexibility and creativity. But a subset of individuals might experience cognitive improvement across the board from amphetamine, despite not having ADHD.

One caveat is that you might not respond to the nootropics that work well for me, or vice-versa. There are so many factors at play. Differences in:

will all potentially affect how you respond to a particular nootropic.

Given this high degree of heterogeneity, only certain generalizations can be made about effective vs ineffective nootropics.

But that doesn't necessarily mean the entire project of is fruitless. I'm going to to tell you about the nootropics that have consistently outperformed for me, while also imparting some tools you can use to follow suit.

Here's an example about what I mean in terms of individual neurophysiology. The follow cases are simplistic, but still illustrate the point I'm conveying:

If you have undiagnosed ADHD, you'll probably find dopaminergic or noradrenergic nootropics most effective. Things like l-tyrosine, modafinil, l-deprenyl. You'll usually have positive results from correcting something that is off-kilter in terms of your neurophysiology with certain nootropics.

You're a 60 year-old man with a 20 pack-year history of smoking, you're pre-hypertensive (untreated), and possibly in the early stages of vascular dementia. You might benefit from some nootropic vasodilators, like niacin or cacao. Obviously, you'll benefit most from seeing a neurologist and getting expert care, but sometimes physicians are reluctant to address health concerns before they are unmistakable, and nootropics may be your only option initially.

Generalizations About How to Approach Nootropics

This reddit post succinctly summarizes some key lessons about using nootropics responsibly and productively. (An example of unproductive nootropic use would be trialling so many compounds simultaneously that you can't draw any conclusion about what's helpful or harmful). Here's what the Redditor norepinephrinex has to say: 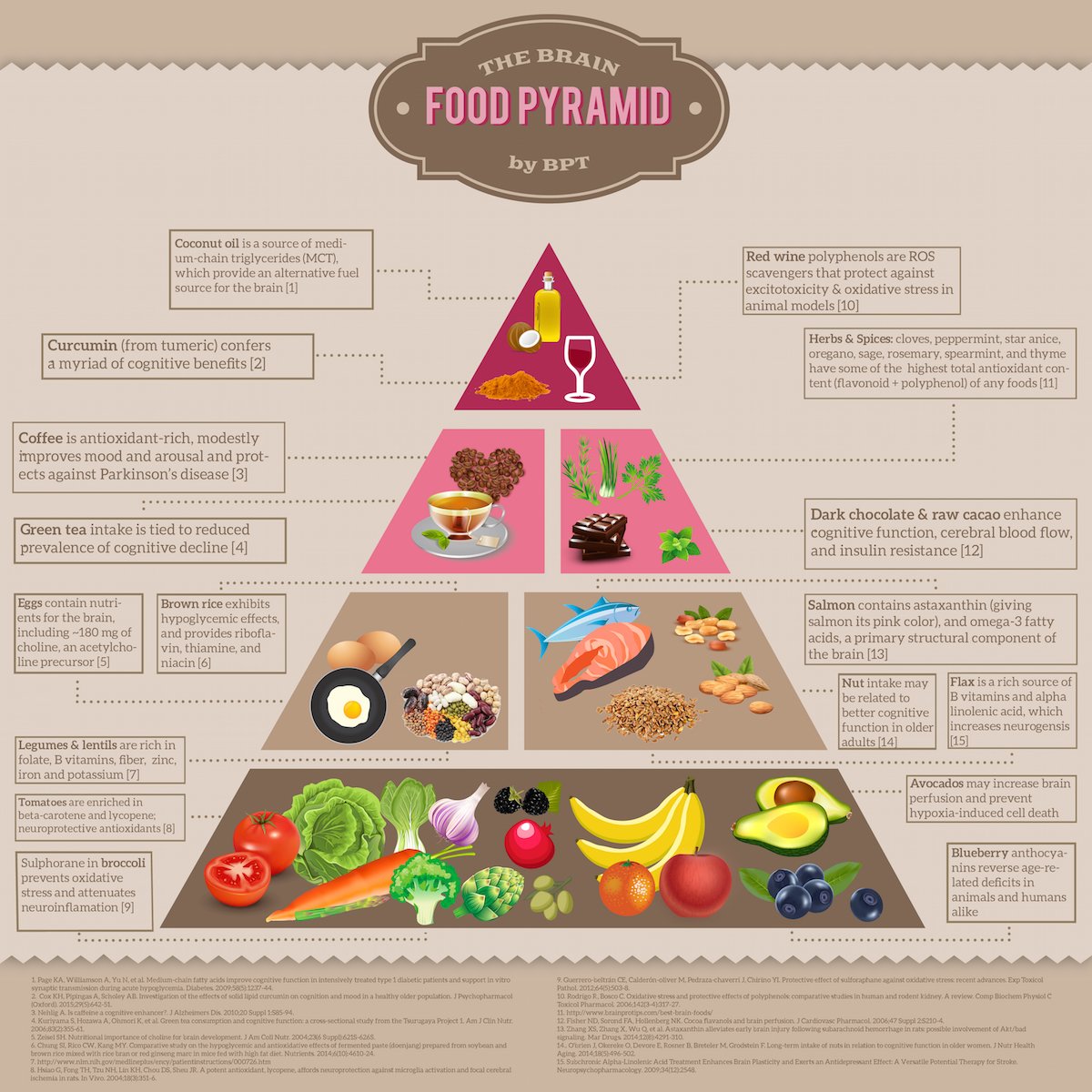 It's true, the Russians have brought us some of the best nootropics. On the other hand, many Russian nootropics don't have much evidence supporting their use, besides anecdotal reports.

But let's not forget about non-synthetic nootropics, nootropics that naturally occur in nature. For example, nootropic foods tend to be underestimated and overlooked. They're dismissed because they don't provide instant gratification – it may take months until you realize benefits – and also because foods seem too mundane to actually provide substantial cognitive benefits.

It is well-documented that certain foods have robust nootropic effects.   For example, there is better evidence supporting the neuroprotective and cognitive enhancing effects of cacao flavonoids, blueberries and curcumin, than for an obscure racetam that remains untested in humans.

Let's consider cacao, for example. Here's my rough summary of the biomedical literature from PubMed.gov about the beneficial effects of cacao on brain function.

Some of these studies are conducted in rodents, and can't be neatly translated to humans.There's also publication bias, and probably some undisclosed commercial interests (the chocolate lobby?!). But the results of these studies are at least suggestive of cacao's cognitive benefits.

A good place to start your research on nootropic foods, is the brain food pyramid. I've also previously written about the best brain foods (based on the Phenol Explorer)

What you're eating is just as important as what you're not eating.

Try to limit foods that have a deleterious effect on brain health.

Put simply, most foods that exacerbate cardiovascular disease or diabetes are also bad for the brain. The brain needs to be well-perfused to perform optimally, and so you need a vasculature (blood vessels) that functions well. Too much sugar is pro-diabetic and impairs insulin resistance and has a number of negative downstream consequences for the brain

I've written previously about this issue here.  Many of these points are common sense, but I'll summarize them anyway. Here's the take-home message from the article:

Cornerstones of the Best Nootropic Stack

Once nutrition and regular exercise are covered, what can be done to reach your intellectual potential?

There are a few nutraceuticals and essential dietary minerals/vitamins that are the foundation to the best nootropic stack. These basics are usually compounds that you won't feel acutely but improve the neurotrophic environment in your brain. I'm talking about a expanded version of the [Mr. Happy Stack][27]:

Needless to say, acute supplementation with the above will not result in immediate nootropic effects; these are just elements that support an efficient neurochemical milieu.

It can also be helpful to determine your risk tolerance at the outset when customizing a nootropic stack. Some people will be comfortable trialling research chemicals (RC) that remain formally untested in humans; others are comfortable taking drugs that have good safety records but are not approved for use in healthy subjects (e.g., modafinil). If you have a very low risk tolerance, you may only be interested in dietary supplements that are endogenously (naturally) present in your body, like vitamin D, B12, or magnesium.

10 Insights From Years of Phenylpiracetam Usage

A Brief History of Phenylpiracetam What makes humans different from animals? Most people would point to higher cognitive function…

Using Dopamine Supplements to Hack Motivation: the Neurobiology of Ambition

Dopamine is the neurotransmitter that seems to make life itself rewarding. In this post, I'll teach you how to…